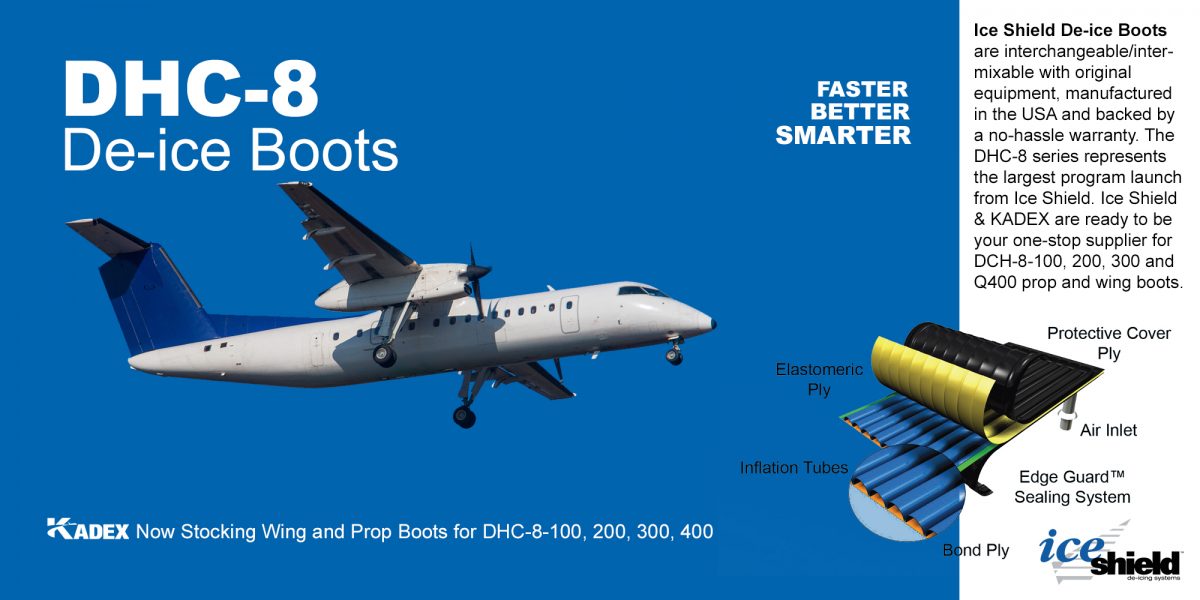 With roots in general aviation Ice Shield recently has been making strides to develop a high quality de-ice product for commuter and charter class aviation. While covering 85% of the general aviation aircraft operating today, Ice Shield has added capabilities and de-icing alternatives for over 120 aircraft models.

Ice Shield De-ice Boots are interchangeable/intermixable with original equipment, manufactured in the USA and backed by a no-hassle warranty. Ice Shield Boots have shown longer cycle life in lab testing when compared to competing products meaning longer time on wing and reducing your component maintenance. The DHC-8 series represents the largest program launch from Ice Shield. Ice Shield & KADEX are ready to be your one-stop supplier for DHC-8-100, 200, 300 and Q400 prop and wing boots.

KADEX is now stocking all boots for the DHC-8 Series (Prop and Wing) at both locations and offering same day shipping.

About kadexadmin
We use cookies on our website to give you the most relevant experience by remembering your preferences and repeat visits. By clicking “Accept”, you consent to the use of ALL the cookies.
Do not sell my personal information.
Cookie SettingsAccept
Manage consent

This website uses cookies to improve your experience while you navigate through the website. Out of these, the cookies that are categorized as necessary are stored on your browser as they are essential for the working of basic functionalities of the website. We also use third-party cookies that help us analyze and understand how you use this website. These cookies will be stored in your browser only with your consent. You also have the option to opt-out of these cookies. But opting out of some of these cookies may affect your browsing experience.
Necessary Always Enabled
Necessary cookies are absolutely essential for the website to function properly. These cookies ensure basic functionalities and security features of the website, anonymously.
Functional
Functional cookies help to perform certain functionalities like sharing the content of the website on social media platforms, collect feedbacks, and other third-party features.
Performance
Performance cookies are used to understand and analyze the key performance indexes of the website which helps in delivering a better user experience for the visitors.
Analytics
Analytical cookies are used to understand how visitors interact with the website. These cookies help provide information on metrics the number of visitors, bounce rate, traffic source, etc.
Advertisement
Advertisement cookies are used to provide visitors with relevant ads and marketing campaigns. These cookies track visitors across websites and collect information to provide customized ads.
Others
Other uncategorized cookies are those that are being analyzed and have not been classified into a category as yet.
SAVE & ACCEPT